5 Tips for Safe Driving in December

Posted by Century Marketing on December 07, 2018

December is a time when many people are on the roads, either shopping for the holidays or traveling to relatives’ homes across town or the state, or even in another state.

Many places in the country have to deal with ice and snow and most places have rain and darkness. Add long trips to what Mother Nature throws at us and driving could get dangerous.

Driving in the Dark. Always remember to use your low beams in cities, towns and on highways. If you are traveling on rural roads, stay alert for other drivers and switch to low beams as soon as you notice them. Even if the other driver is some distance away, switch to low beams. The hills on the roads could cause your high beams to moentarily blind another driver if both of you are on part of the road that causes your lights to shine directly in the windshield. If it’s foggy, use low beams – you’ll be able to see better. If you have fog lights, use them as they’ll significantly increase your visibility.

Driving in the Snow. The main thing to do when driving in the snow is to slow down considerably. Your speed should not be over 45 mph, if it’s that. It takes very 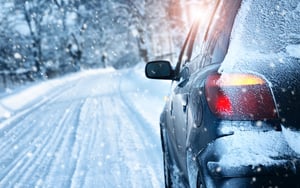 little snow or ice to cause your car to slide. You should always carry an emergency kit with extra warm clothes, non-perishable food and water in your vehicle in case you do slide off the road and it is some time before someone can get you out. This is more of a concern if you are in rural areas, but it could happen in urban areas as well.

Driving on Ice. Always remember that bridges ice over before the rest of the roads. If you do start sliding on ice, you should know how to stop the slide. Never hit your brakes and always turn into the spin. If the rear of the car is sliding toward the right, steer to the right. Be careful to not over-steer, as that will cause the car to slide in the other direction. If it does, be prepared to steer into that slide. It may take a few times of going back and forth before the car straightens out. As with driving in the snow, slow down if the precipitation is turning to ice.

Driving in the Rain. Driving in the rain could be just as dangerous as driving in the snow and ice. While it’s not frozen, you could hydroplane, which is just as bad as sliding on ice. Again, remember to steer into the slide. Don’t rely on traction control or other anti-slide systems in the vehicle. They may not work or the condition may be too much for them to correct. Slowing down in the rain could keep you from getting into an accident or sliding in the first place.

Driving on Long Trips. It’s very easy to lose focus after you’ve been driving for many hours. No matter how much of a hurry you’re in, stop every two to three hours to stretch. Even if you are sharing the driving, you should stop and stretch or even get something to eat. And, if you find yourself getting tired, stop and relax for an hour. Even if you don’t sleep, you’ll be more refreshed.

Reducing speeds for the conditions goes a long way in saving you from getting in a wreck. Even if you are not hurt, you could end up spending money for repairs if you wreck. It’s better to leave earlier and drive slower.